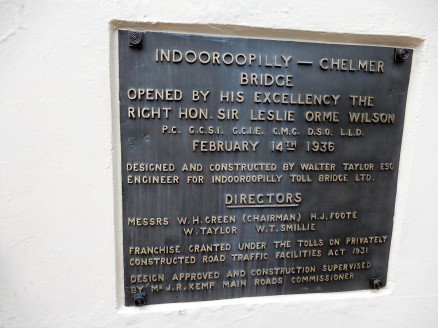 I was lucky to go on a walking tour to the Chelmer Bridge in Indooroopilly, Brisbane. Our guide was one of Brisbane’s finest seniors who offer their time to bring tourists and sometimes locals on walking tours in and around Brisbane.

The tour was 2 hours or there abouts as there really is no time limit and the pace is as fast or slow as you want it to be.

One lady in our group was a local and had always lived in Brisbane but didn’t know too much about the bridge so came along too. Our guide had lots of local stories and was eager to point out various places of interest along the way. As he was born and bred in Brisbane he was able to tell the history of the area  before the bridge  was built, during the building and the effects it had when it was finished. He had so many funny stories to tell as well as insights about the locals  that would normally be lost with a usual tour guide.

The local lady who had joined was totally surprised to learn that there was a beach in Brisbane right where the bridge was built, but unfortunately it was washed away during the digging of the river bed for the foundations. She said she was delighted to learn that as she hadn’t even learned it in school!!

The Steel cables (seen above) used to anchor the bridge are the cables that were used on the Sydney Harbour Bridge. On its completion there were excess cables so it was decided to remove some of them to make the bridge more pleasing to the eye, and the designer Walter Taylor decided to use them on the Chelmer Bridge too so he bought them and had them brought to Brisbane.

Up till 2009 descendants of Walter Taylor lived in the bridge, before that the toll man lived there. You can see the windows of the home in the photos. Taylor had made an agreement with the local council that future family members were to be allowed to live on the bridge for a nominal rent and the last of the Taylor family left in 2009.

Check out on the Brisbane website for details of the walking tours.

This is a text widget. The Text Widget allows you to add text or HTML to your sidebar. You can use a text widget to display text, links, images, HTML, or a combination of these. Edit them in the Widget section of the Customizer.
Loading Comments...
%d bloggers like this: